The Prevent strategy forms one of four strands of the UK Government's Counter-Terrorism strategy known as CONTEST.

The UK faces a continuing threat from both international and domestic terrorism. The Prevent strategy aims to stop people becoming terrorists or supporting terrorism.

Violent extremism can emerge from any community and can be inspired from a wide range of causes.

Whilst groups inspired by violent Islamist ideology still poses a threat to the UK, the Prevent strategy also seeks to combat extremism motivated by the extreme right wing, as well as extremism motivated by single issues such as animal rights. Accordingly, the Prevent strategy does not stigmatise any community. Prevent does not aim to criminalise people for holding extreme views. Instead it seeks to prevent individuals from using, or promoting, violent activity as a means of promoting these views.

Prevent is driven by a multitude of groups with influence at the local level. A number of agencies contribute to the strategy, from the Police and other emergency services, Local Government and Councils, local businesses and voluntary groups, to members of the general public. Runnymede has its own Prevent Strategy. Each of these groups has an instrumental role to play in monitoring the resilience of our local communities to the threat posed by extremism. Members of the public can play an instrumental role in preventing extremist groups from operating within their communities.

No one is better placed than members of the public to notice potential extremist activity taking place within their own community. The following list provides some possible examples. This list is not exhaustive and is intended for illustrative purposes only:

Incidents such as these can be reported to Surrey Police using 101.

Extremist activity can also be reported through the Anti-Terrorist Hotline 0800 789 321. The line is confidential, anonymous and intended for the reporting of non-life threatening activity.

To report potentially immediate threats, such as a suspicious vehicle or package, always call 999.

The public can now report online content (suspicious internet sites, chat rooms or other web-based forums) they suspect may be of a violent extremist or terrorist nature online

iREPORTit is a free mobile app that allows the public to anonymously report any content promoting violent extremism. All referrals go to the national Counter Terrorism Internet Referral Unit (CTIRU) for assessment and is available on Apple and Android 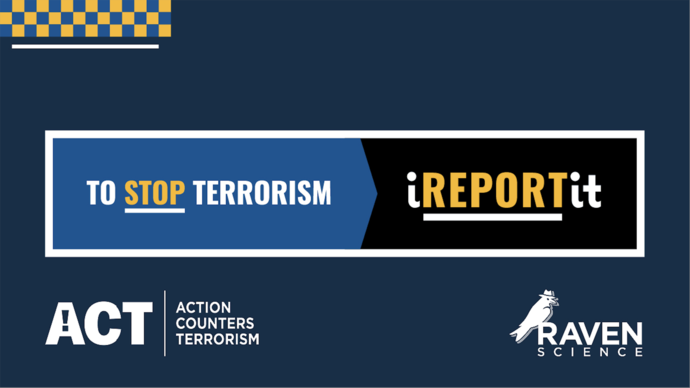 ACT Awareness eLearning is a free Counter Terrorism (CT) awareness product designed for all UK based companies, organisations, and the public. This eLearning product was previously only available to staff working in crowded places like shopping centres and entertainment venues. Now Counter Terrorism Policing have decided to open the training to anyone who wants to become a CT Citizen so they can learn how to spot the signs of suspicious behaviour and understand what to do in the event of a major incident.